Crowdfunding is not just about money

For creators, crowdfunding has the potential to address various project needs. Obviously, crowdfunding campaigns serve to collect money to make the idea economically possible, but the community benefits are arguably more significant. Project backers feel emotionally invested in the success of a project. This is true both during the fundraising campaign itself and when the project is brought to life.

Regardless of how a founder launches a creative or entrepreneurial project, one of the most challenging aspects of attaining success is finding an audience or customer base. Crowdfunding has a built-in advantage of establishing a community of enthusiastic supporters during the campaign. Once a backer has helped fund a project, he or she has status as an early adopter with bragging rights as a tastemaker or trailblazer. We all love to be the first to use or own a new technology, the first to see an exciting film, or even to be able to point out our name in the credits. Backing projects can raise the social status of the backers themselves. As a result, they have some personal investment in the external notoriety and recognition of the final product. This is especially rewarding when the project becomes successful outside of the backer community!

Such recognition has been a primary benefit of the crowdsourced film projects I have participated in. Once a film is released, it is not uncommon to see several hundred supporters spreading the word to their respective social circles, noting they have a “special thanks” in the credits. This type of enthusiasm and publicity can be very hard to obtain organically. In addition, people who back crowdfunded projects tend to be active and enthusiastic promoters of the things they love. These are the kinds of vocal and engaged tastemakers you want for your project!

An example of a crowdfunding project for a film.

A dedicated crowdfunding community can also serve as a signal to investors that a project could achieve real business success. Some entrepreneurs leverage crowdfunding as a proof-of-concept to raise larger pools of money via traditional methods. Investors certainly love great ideas, but great ideas with proof of success and a vocal support base of tastemakers are even better. 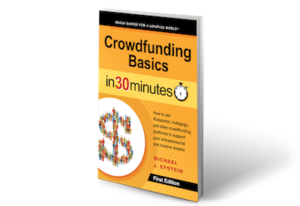 This is awesome: What Causes the Smell of New & Old Books? compoundchem.com/2014/06/01/n… #books #indiepub pic.twitter.com/kqY4BYE5bn

Excel tip of the day! How to remove duplicate text or numerical values in an Excel spreadsheet. excel.in30minutes.com/how-to-… pic.twitter.com/MT1gXbbKXU

Do you have a Microsoft Word file you want to edit in Google Docs? Here's how you do it: word.in30minutes.com/google-d… pic.twitter.com/2A2AVF8ojQ

Friday Twitter PSA: "#The"? Seriously? Don't abuse hashtags. They don't deserve it, and neither do your followers. Please RT. pic.twitter.com/gbiEYi8WfC

Trying to get your Excel ducks in a row? Here's how to line up numbers and center text in an Excel spreadsheet. excel.in30minutes.com/how-to-… pic.twitter.com/pmQ7DT1Zwk

Here are five things you should know before buying your first house! homes.in30minutes.com/what-yo… #newhome #homebuying pic.twitter.com/6Bvlu0R6hC

Genealogy Basics In 30 Minutes reviewed by @KirkusReviews Indie: “The author discusses the value and limitations of online genealogy sites, where readers are likely to find both solid research and hearsay ...” kirkusreviews.com/book-review… #genealogy #ancestry